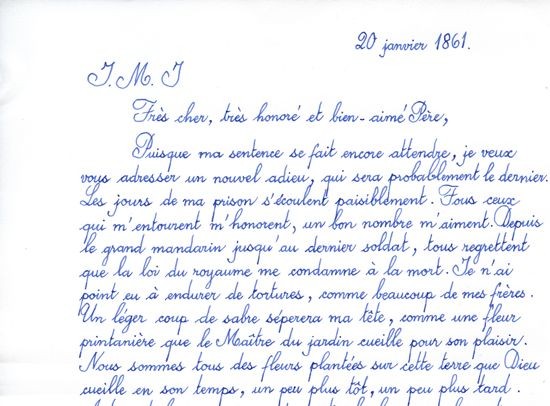 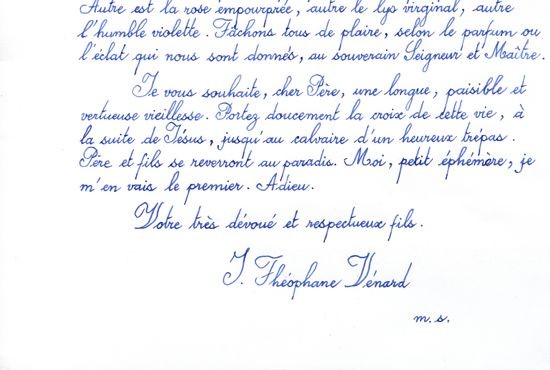 2.2.1861 (2009- ), last letter of Saint Théophane Vénard to his father before he was decapitated, copied by Phung Vo, ink on paper, 29,6 x 21 cm (title and number of existing copies remains undefined until the death of Phung Vo; each handwritten text to arrive in an envelope postmailed by Phung Vo directly to the buyer, whose address as recipient will be archived by Phung Vo). All images: Unless otherwise noted courtesy Danh Vo and Galerie Isabella Bortolozzi, Berlin.

ART iT: How many works have you done with your father?

DV: The most extensive, formalized project is the one using his handwriting. Vietnam is the only Asian country that officially made the Latin alphabet part of the written language, with Chinese characters now limited mainly to the scholarly field. Most Vietnamese have this really beautiful handwriting – it’s perfect Latin – but of course it’s also something else. My family were part of the second wave of boat people, mainly lower class refugees, and my father never learned proper Danish or other Western languages. What I have been doing is using him to visually transcribe different texts that I provide him.
For example, I did one work deriving from the catalogue I made for the Kunsthalle Basel show, which has a text compiled by Julie Ault combining texts by Pasolini, Cioran and other writers. I had my father rewrite the whole catalogue text. What I like is when language travels and returns, but in a mutilated way. I love the idea of language as being totally opaque, and then when we see it in an exhibition space we recognize immediately that there’s a gap in it.

ART iT: Do you display these text pieces as a form of calligraphy?

DV: I think of them as images or drawings. Educated people have learned to see things in a certain way. We look at each other and think we understand but because of the producer there is a detour embedded in the work that goes beyond our comprehension. That’s something that I like about the work because most cultural producers have been impacted by left-wing politics or infected by the idea of humanism, and we always try to discuss these matters but it’s always “about” them. What was satisfying for me with this project was to somehow drag my father into it, such that he is physically participating, but also detached. There’s something very disturbing about it that I really like.

ART iT: What did your father do when he got to Denmark? Did he ever have to speak the local language in his daily life?

DV: My parents ran food shops, and didn’t really need to speak. They would shift their business a lot, so at times when they felt they had enough money they would run a shop that only served drinks, to cut down on the work load. Depending on the kind of shop, the language changed with it.
One of the last shops they had was a dive bar with billiards tables. My mother never drinks alcohol, but she’s a total gambler, and she taught herself how to play billiards. Even though she’s always been a very prudent Vietnamese woman who never hangs out with strange men, she suddenly learned this very crude language from the bar patrons. So my parents just adapt to whatever they’ve been through. It was really funny, though, to hear my mother talk Danish with this hardcore, proletarian language.
But there are also other things. My father was visiting me in Paris when I was negotiating to get the chandeliers from the Hotel Majestic, so I thought he should come along with me to see the space. You have to imagine that the whole building and ballroom were designed to present this lavish hotel. In the taxi to the hotel my father was complaining the whole time, “We’re going to the room of betrayal, the room of death.” I wasn’t able to physically mediate it but as a mental tool he really constituted the work because when we finally entered the ballroom and the lights were turned on – and it’s this mirrored hall – the only thing he could say was, “Oh, Danh, I think the Queen of Denmark must have one of these in her castle.”
I thought that was so precise. These chandeliers are in so many ways remnants of history but what my father said dragged them into a future perspective: these chandeliers were designed to make you leave your sorrows behind, to make you forget. My father was so affected by the events that occurred in that ballroom, but when he finally entered that space, he was thinking the Queen of Denmark must have the same chandeliers in her castle. I was so blasted by this. I have a neurosis about enclosing objects but he really opened it up, he made the object contradictory and made me think, which was so amazing. 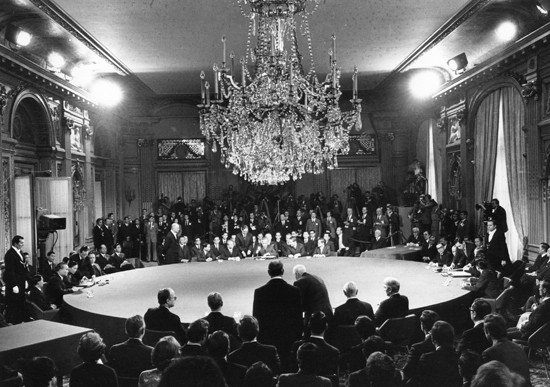 Delegations from the US, the Provisonal Revolutionary Government of South Vietnam, North Vietnam and South Vietnam during the signing ceremony of the agreement to end the Vietnam War at the Hotel Majestic in Paris, Jan 27, 1973.

ART iT: How about when you did the boat sculpture with Tobias Rehberger, Gu Mo Ni Ma Da (2006), based on your father’s sketches of the boat your family used to escape Vietnam – was that a similar or different experience to the handwriting project?

DV: First of all there were so many failures in that project because it was beyond my control. I think it was very different because the whole project was about copying Tobias’s work. I studied with Tobias. He did a project where he remade all of his father’s Sunday paintings, and that made an impression on me at the time. I thought that this project would be a good extension of his work and I thought it would be interesting in terms of the teacher-student dynamic to start a project and see where it led, but ultimately he put his fingers all over it, and that’s it. It was a good experience for me, but I think the project would have been better if he could have let it go.

ART iT: Was it uncomfortable, too, because it was such an important part of your history that you gave to someone else to realize?

DV: Of course it was, but I think that also taught me to let go. I can’t sit in a corner and complain about these things. This is reality.