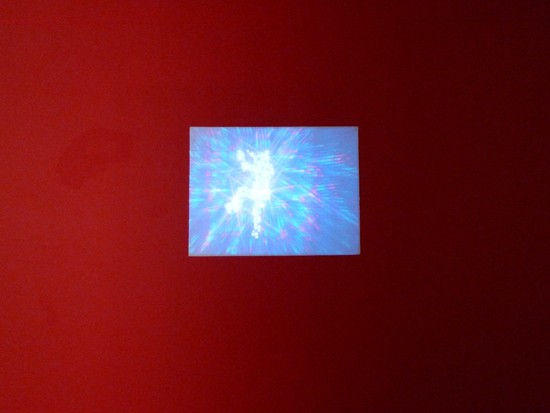 Entitled “ILLUMInations” and organized by Bice Curiger, the artistic director’s exhibition of this year’s 54th Venice Biennale looks at light both as a sensory and a metaphoric phenomenon in contemporary art, while also attempting to address the Biennale’s identity as an event organized around the concept of national presentations. Based in Switzerland, where she is curator of Kunsthaus Zürich, Curiger has produced an exhibition that is generally meticulously installed to elicit the specific characteristics of each work as well as the interactions between different works and venues. However, for non-Europeans the scope of “ILLUMInations” comes off as somewhat parochial, with only three artists from South and East Asia, and can be seen as part of a retrenchment of the biennale format after the celebration of multiculturalism and diversity that in recent years had come to characterize such large-scale international surveys. Curiger, evidently, chose to focus on deepening her theme within a specific tradition rather than affecting worldliness, picking up a curatorial standard that has been raised elsewhere at events like the Berlin Biennale that are rooted in a European as opposed to “global” discourse.

The figurative and literal core of “LLUMInations” is the suite of three paintings by Jacopo Tintoretto that occupy the central gallery of the Central Pavilion in the Giardini. On Tintoretto, Curiger wrote in her curatorial statement, “These paintings exert a special appeal today with their almost febrile, ecstatic lighting and a near reckless approach to composition that overturns the well-defined, classical order of the Renaissance,” and, certainly, they are visually stunning. Yet placed in a white cube environment far removed from the religious and architectural contexts of sites where they are usually on display, such as the Galleria dell’Accademia and the Scuola Grande di San Rocco, these works come across as a perfunctory gesture to the host city and the possibility of alternative readings of history. They may serve to illustrate the exhibition theme, but fall short in contributing to the coherency of the exhibition experience.

Rather, two works presented across from each other directly preceding the Tintorettos suggest a richer, more complex starting point for “ILLUMInations.” The first of these is Jack Goldstein’s short film The Jump (1978), made using altered footage taken from Leni Riefenstahl’s documentary of the 1936 Berlin Olympics, Olympia (1938). Only 26 seconds long, Goldstein’s version captures in its starburst of kinetic energy both the promise of the European Enlightenment and the underlying darkness that would define 20th-century Europe. The other is Gianni Colombo’s Spazio Elastico (1967-68), an installation of a darkened room divided up by a grid of glowing cords that are subtly shifted in space by a hidden pulley mechanism, and which in fact was awarded a Golden Lion at the 1968 Biennale. Wondrous and brooding, these works understand the capriciousness of light – its capacity to act as both beacon and lure – and its interdependency with darkness. Other impressive moments from the Central Pavilion include paintings by Sigmar Polke and a sequence of rooms connecting a sculptural installation by Gabriel Kuri, a group of clay sculptures by Fischli/Weiss and Karl Holmqvist’s maquette of the Palazzo della Civiltà Italiana, a remnant from Benito Mussolini’s plans for Rome to host the 1942 World Expo. 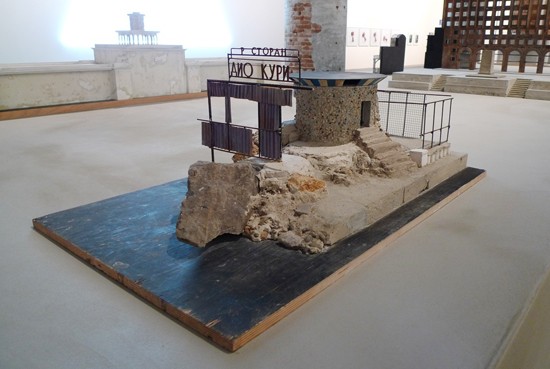 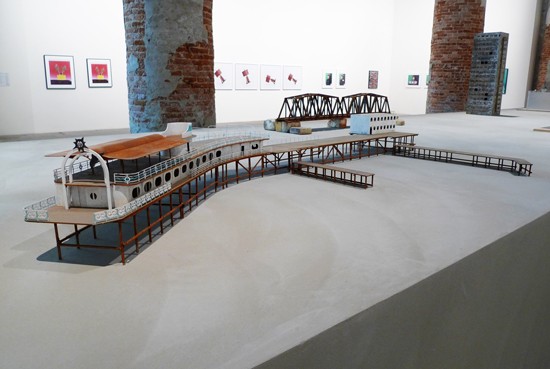 In contrast to the refinement of the works in the Central Pavilion, the Arsenale is home to those that emphasize materiality, in consideration of the spatial characteristics of the site. Visitors enter through Song Dong’s Song Dong’s Parapavilion (intelligence from poor people) (2011), one of four “para-pavilion” structures Curiger commissioned to host the works of other Biennale participants and break up the additive nature of the mega-exhibition. Originally intended to host works by the conceptual photographer Yto Barrada (which ultimately were installed separately), Song’s structure made primarily from the components of a traditional Chinese home was one of the only displays that recalled the exoticism of past Biennales.

While much of the Arsenale held fast to the literal “ILLUMInations” of lights and mirrors, some of the exhibition’s most affecting works were also on display here, such as Andro Wekua’s installation of architectural models Pink Wave Hunter (2010-11), for which the artist recreated almost exclusively from memory a group of buildings from his hometown of Sochumi, Georgia. As can be expected, the models differ from the actual buildings, veering at times into sheer abstraction. These chimerical divergences lyrically manifested the subjective gaps in memory, and the tensions between remembrance and trauma, that have developed over the course of Wekua’s 17 years of exile after his father was killed during the civil war in Georgia that followed the collapse of the Soviet Union, and the then-teenager fled the country with his mother and brother.

Elsewhere, Nick Relph’s Thre Stryppis Quhite Upon ane Blak Field (2010) employs triple CRT projection – which breaks up images into separate red, green and blue channels that are then recombined on the projection surface – to scramble footage taken from documentaries on the history of the Tartan check pattern, Ellsworth Kelly and Commes des Garçons, respectively. Through its distortion of the overlapping source footage and the resulting patterns of blocks of elementary colors, the work creates attractive formal juxtapositions while also prompting reflection on the production and reception of light-based media. Emily Wardill’s Sick Serena and Dregs and Wreck and Wreck similarly explores the layering of video to brilliant effect, interspersing footage of stained glass windows from medieval English churches with scenes from amateurish, community-drama-style sketches about love and faith. With the allegorical images in the stained glass compositions unfolding on the same screen as the moralistic oratory of the sketches, the contrast between light passing through colored glass and its abiding association with the transmission of knowledge fits the exhibition theme perfectly, performing an elegant excavation of language and its evolving means of communication. 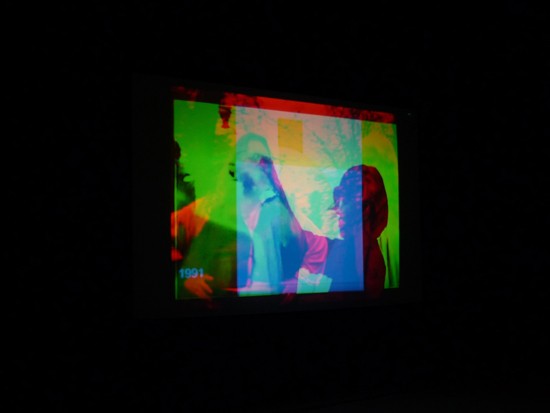 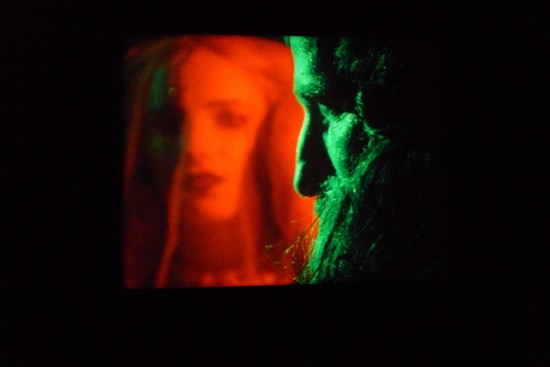 Yet there were also a number of works that seemed to respond to “ILLUMInations” at only the most superficial of levels. Burning slowly over the course of the Biennale period, Urs Fischer’s recreation of Giambologna’s marble Rape of the Sabine Women (1574-82) as a monumental candle piece, and a second, life-scale portrait of the artist’s friend, Rudolf Stingel, bring an element of spectacle to the exhibition, but also, in their easy irony, a degree of cynicism. In other cases Curiger overextends the metaphor. In a spacious hall at the very end of the Arsenale is a group of sculptural works by Monica Bonvicini, an artist who has long grappled with the physical and societal restraints imposed upon women. At first glance the installation exudes an austere beauty, the three sets of steps leading to nowhere that constitute 15 Steps to the Virgin (2011) holding the space with minimalist aplomb. But this effect also aestheticizes the confrontational elements of Bonvicini’s work, leading one to question whether it has been included only for its formal qualities and its use of neon lights.

Another disappointment is the para-pavilions, a new initiative that Curiger has introduced to the Biennale. As previously mentioned, Song Dong apparently made no effort in conceptualizing his para-pavilion to interact with or accommodate the work of Yto Barrada. Entitled Extroversion, Franz West’s para-pavilion is a reconstruction of the artist’s art-filled kitchen in Vienna, turned inside out so that its walls and accompanying artworks now form the exterior of a small booth, inside of which is placed a slideshow projection by Dayanita Singh. Interesting as an attempt to invert the relations between container and contained, West’s para-pavilion nevertheless does not measure up to the compelling oddness of the artist’s large, pink, tubular sculpture Eidos (2009), standing like an exposed intestinal tract in the lawn of the nearby Giardini delle Virgini. More successful is Oscar Tuazon’s effort, placed outdoors near the Central Pavilion. Made of concrete slabs propped like cards against each other, this formally impressive intervention provided a fitting site for a series of performances that took place there during the Biennale preview. 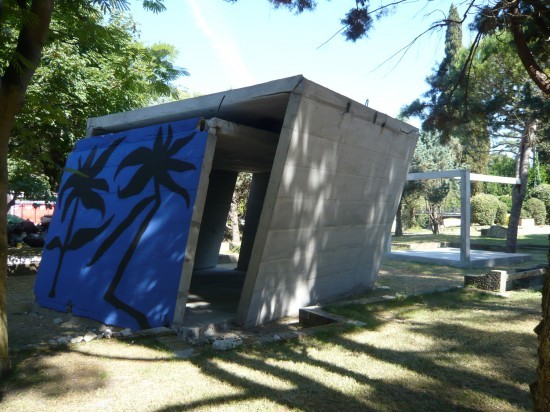 Ultimately, while the exhibition displays a high degree of technical competence and curatorial rigor, one can’t help but feel that Curiger missed an opportunity to either expand “ILLUMInations” to a more universal perspective or to more assiduously question the nature of universality, and how it is projected in contemporary exhibition practice. Particularly given Tintoretto as a starting point, Curiger could have done more to look toward future horizons. Instead, along with Fischer, her inclusion of artists like Ryan Gander, Maurizio Cattelan and Philippe Parreno who engage in a kind of clubby, prankster conceptualism meant that the exhibition’s stated intention of unflinchingly addressing Venice’s relationship to contemporary nationhood glimmered at the margins of the Biennale as only the dimmest of faint lights.