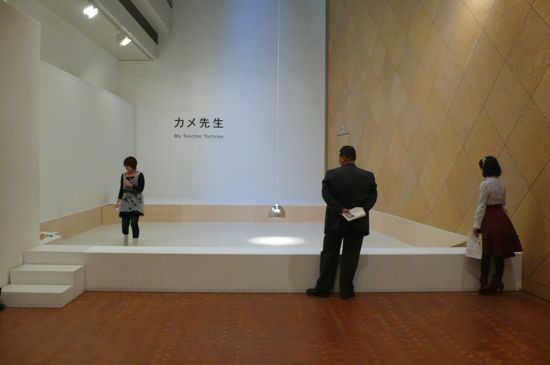 Shimabuku – Installation view of My Teacher Tortoise (2011). All images: Photo ART iT.

Despite the ambitious-sounding title “Kaza Ana/Air Hole: Another Form of Conceptualism from Asia,” the National Museum of Art’s current exhibition of nine artists and artist groups addresses both conceptual art and Asia in only the loosest, most superficial of terms.

The exhibition begins with Haegue Yang’s wheeled assemblages of light bulbs, synthetic tubing and found objects ranging from plastic vines to hair curlers, and continues with works by Yuki Kimura from a solo project made in 2010 for the Izu Photo Museum featuring enlarged found photographs integrated into furniture-like sculptural arrangements. Next is a multimedia installation by Qiu Zhijie incorporating a free-standing video projection with a group of cardboard stencils of words in Chinese and English like “construction,” “development,” “award” and “revolution” affixed to one wall and a grid of vintage Cultural Revolution-era diplomas hung on the other wall, their commendations making references to the Revolution itself as well as recipients’ contributions to the “establishment of socialist modernization.” Also included are the confrontational street performances of the young Japanese collaborative Contact Gonzo, displayed as video projections in the midst of a chaotic environment complete with a chain-link fence, a tent and a makeshift wooden hut, as well as the deadpan sculptural interventions of Shimabuku and an archival presentation on the artist group The Play, formed in Kyoto in 1967. These are followed by rooms for photographic and sculptural works by Dinh Q Le and large-scale video projections by Araya Rasdjarmrearnsook, respectively, on one end of the bifurcated gallery layout, and an installation by Fumio Tachibana of cut-up and rearranged printed matter and furniture on the opposite end. 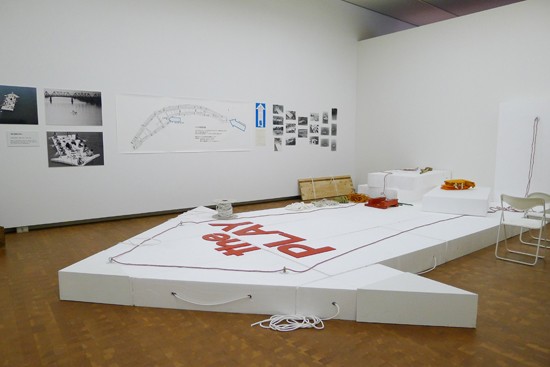 The artists have apparently been selected only for the coincidences of their shared interest in non-traditional approaches and their Asian heritages, and not because they particularly offer an alternative to conceptual art as developed in the US and Europe, or even because they engage with each other in a broader, regional discourse. This is underscored by the overly cautious exhibition design that allocates to the artists individual spaces, shifting the dynamic from dialogue to comparison and undermining any curatorial rationale for why these particular works were selected and not others, why these particular artists were selected and not others. The result is touristic at best, a kind of exhibition-as-slideshow effect.

In attempting to establish a new context for its artists, “Air Hole” ironically puts them out of context – out of context with the trajectory of an essentialized international conceptualism that becomes the de facto mutual reference, and out of context with the specifics of their own localities. A more provocative approach might have been to use this inherent out-of-contextness as a starting point. Indeed, the exhibition’s one moment of clarity is an installation by Shimabuku that awaits in an atrium beyond the galleries proper. Here, the artist has designed a minimalist white enclosure that contains a large, live tortoise. Visitors are invited to enter the enclosure and interact with the animal. Nearby, a poster, partially quoting from astrophysicist Stephen Hawking, reads: “Stop / Stop and Think / Return / Occasionally Run / ‘Man should try to avoid contact with alien life forms.'” A wry commentary on conditions of spectatorship, self and communication, this work and its makeshift dispensary of latex gloves and hand sanitizer get right to the heart of the complications of otherness.