Tatsumi Orimoto’s turning point: ‘Lunch’ and ‘Punishment’ after the death of Art Mama 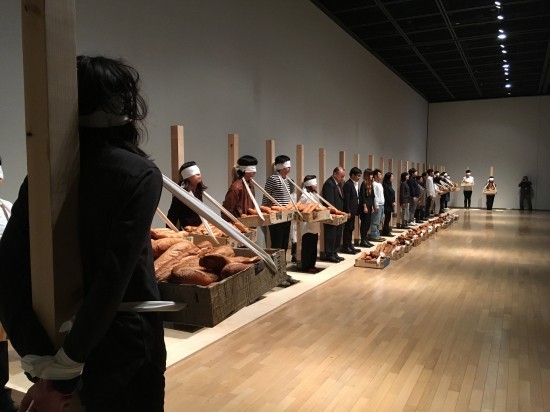 Scene from Punishment of 26 Bread Men (2017) at the Taro Okamoto Museum of Art.︎

This year (2017), a large number of international art exhibitions and international art festivals were once again held at venues all over Japan. I intend to summarize these at a later date, but this time I would like to comment on two performances by Tatsumi Orimoto. The first was at Corridor of Art through the Seas and Mountains (September 16 – November 12, 2017). Held in Onomichi and the Tomonoura port district of Fukuyama in Hiroshima Prefecture, with the governor of Hiroshima acting as honorary president of the executive committee, this festival is expected to grow even more in the years ahead. The second was in Kawasaki.

The year 2017 turned out to be a major turning point for Orimoto. His mother, Odai Orimoto, whom he had lived with all his life and taken care of for 20 years, died on May 25. She was 98 years old. I refer to this as a turning point not only because Orimoto lost a dear parent. I hardly need to remind those familiar with it that the series “Art Mama,” in which Orimoto turned the daily routine of caring for Odai, who suffered from depression and Alzheimer’s disease, into art performances, has been the driving force behind Orimoto’s lively practice for the last 20 years. However, Orimoto knew more keenly than anyone else that their remaining time together was limited. That he ventured to stage at Aoyama Meguro in November 2016 a performance called I make up and become Art Mama in which he impersonates Art Mama, too, is perhaps an indication that he has been thinking seriously about the feasibility of “‘Art Mama’ after the death of ‘Art Mama.'” 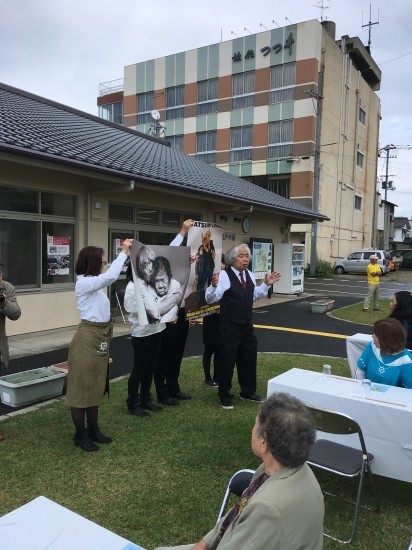 Scene from Lunch with Fifty Island Grandmothers (2017) at Corridor of Art through the Seas and Mountains (Onomichi, Hiroshima).︎

This year, the year that his mother passed away, Orimoto presented as part of the aforementioned art festival a performance in which he expanded the “Art Mama” concept well beyond his own mother. This was Lunch with Fifty Island Grandmothers, held on October 7 at the Port of Setoda on Ikuchi Island.

Of course, since being held for the first time in Kawasaki, this “Lunch” series, in which Orimoto gathers together local grandmothers and joins them to eat local cuisine, has itself been staged in a variety of locations including Brazil, Portugal, the UK and Denmark. However, since the death of “Art Mama,” the different grandmothers that gather in each location have inevitably taken on the appearance of Odai’s younger and older sisters. Indeed, before the beginning of the lunch at the port on Ikuchi Island, Orimoto made these feelings clear to the grandmothers, who, though their circumstances may have been different, probably shared many of the same burdens, when he displayed a photo of his own mother, Odai, and took it upon himself to touch on her troubled life.

Speaking of difficulties, this outdoor lunch on an island in the Seto Inland Sea where the weather is changeable was not without its own problems. Though it was barely fine before noon, the weather took a dramatic turn for the worse immediately before lunch. Rain clouds suddenly began to gather, and though it seemed that the rain that fell soon afterwards would not last long, it never stopped completely. The food had already been prepared and the tables decorated. But as things stood it was no time to enjoy a meal. It looked like the food would go cold, that all the preparations would come to nothing. Moreover, keeping the elderly and hungry grandmothers waiting for the performance would simply exhaust them both physically and mentally. As fears grew that the performance would be cancelled, the plates on the tables were all cleared away. A tent was hastily erected to prevent water collecting on the tables, and while the grandmothers were made to wait in a small waiting room on the wharf, of all things thunder began to sound with a deafening roar. Catching sight of Orimoto, a veteran who has ridden out many a crisis, I saw that even he could not hide his apprehension.

Just at that moment, an astonishing thing happened. From among the grandmothers assembled in the waiting room, singing arose and the sound of laughter could be heard from outside. This came as a complete surprise. It was not as if the grandmothers had been roped in to help out. Clearly, they were looking forward to Orimoto’s performance and were waiting for the weather to improve. 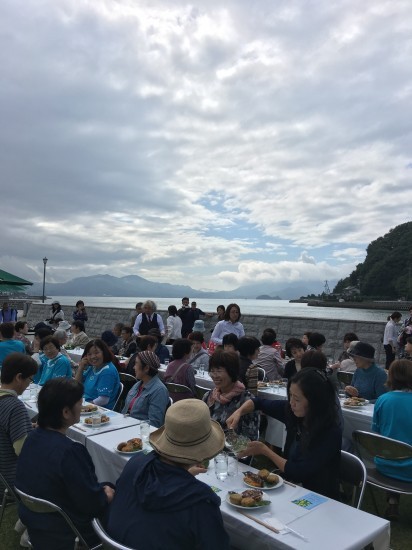 The grandmothers’ voices probably didn’t reach heaven, but the rain gradually eased and eventually stopped completely. Certainly, the food was cold and the grandmothers may have been famished. But perhaps because of this, as soon as the slightly late lunch got underway, the meal proceeded in a lively manner, and against the backdrop of the mountains of the Seto Inland Sea still glistening from the rain, a wonderful scene presented itself. Such a scene could never be produced artificially, or to put it another way, conceptually.

Perhaps he suddenly warmed to the task. For after thanking the grandmothers at the successful conclusion of the lunch, Orimoto stirred up the crowd by transforming himself into Bread Man and slowly moving around the tables. Surely this would have been a first for all of the attendees. And without a doubt the memory is firmly etched in their minds. 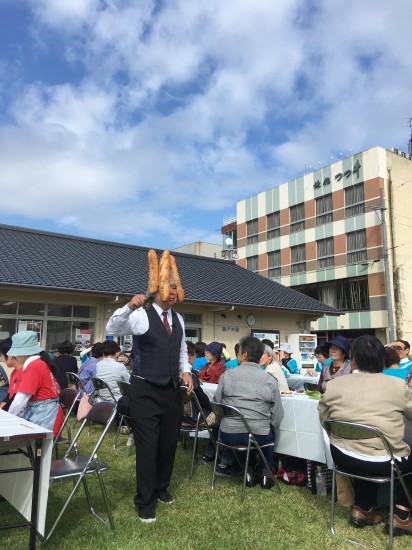 By this time not only had the weather improved, but the midsummer-like sunshine had returned. From cloudy skies to rain followed by heavy passing showers with thunderclaps. The rain suddenly easing amid singing voices, then the skies clearing and the midsummer-like weather returning. All in all, it was a uniquely precious autumn day feast filled with light and dark and ups and downs, just like the life of Odai Orimoto herself.

On the 22nd of the same month, while the excitement of the day still lingered, Orimoto conducted a performance titled Punishment of 26 Bread Men, part of a separate series called “Punishment,” at the Taro Okamoto Museum of Art in his hometown of Kawasaki.

I first became acquainted with “Punishment” last year at the Tatsumi Orimoto solo exhibition, “Art x Life,” held at the Kawasaki City Museum. (1) On that occasion, the performance itself was transformed into a kind of static presentation in which some of the scaffolds used were displayed together with videos of performances in the same museum as well as in Berlin, Madrid and Copenhagen.

The reason Orimoto uses bread in his performances is to render everyday actions alien, and precisely because of this they have always been tinged with a vague sense of humor. Any hint of death or violence is absent. However, as clearly indicated in this series, in Christianity, bread actually symbolizes Christ’s body. The 26 punishment scaffolds is a reference to the number of Christians who were rounded up in Kyoto and taken to Nagasaki where they were crucified on top of a hill upon the orders of Hideyoshi Toyotomi, who feared that Christianity was spreading and gaining in influence. Originally, bread was regarded as foreign to the Japanese, who had a staple diet of rice and grains. And today, while it could be said that bread has become such an established part of our lives that it does not seem like something foreign, if we look hard at it, it does actually appear somehow peculiar. It suggests a completely different worldview compared to sticky grains of rice served in a bowl. And this difference is even greater in the case of the rough, rock-hard French bread that Orimoto likes to use. 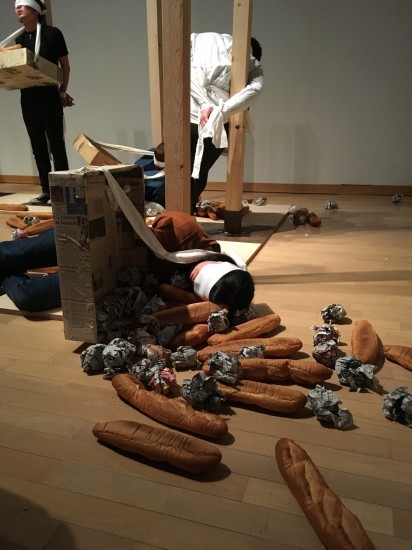 Scene from Punishment of 26 Bread Men (2017) at the Taro Okamoto Museum of Art.︎

Twenty-six people, blindfolded and with their hands tied behind their backs with white cloth, are restrained on scaffolds made of wood and metal, with boxes full of bread hanging from their necks. They are called one after another, by number instead of the names their parents gave them, and at the sound of a plate being smashed, each one “dies” while writhing violently and screaming. Although this installation was recreated in its entirety with all 26 scaffolds at the Busan Biennale 2016, where I served as a curator, it did not include a performance. Its performance at the Taro Okamoto Museum of Art was the first time in a truly long time that it had been recreated in Japan.

The result was more alarming and shocking that I expected. As for the weather, it was even more unsettled than during the “Lunch with Grandmothers.” A typhoon was forecast to directly hit the greater Tokyo metropolitan area later that night, and it rained heavily in Kawasaki from the morning, turning the streets in the park where the museum is located into rivers. Amid this, I hurried on foot up the gentle slope leading to the museum, located on a hill, where “Punishment” was due to be performed. I was to be a witness to it. Naturally, the turnout was smaller than expected. But precisely because of this the venue where the 26 scaffolds were lined up took on a mysterious, closeted atmosphere suggestive not of a public event but of a secret ceremony.

Something I sensed strongly once again on this occasion is that to an almost extraordinary extent, Orimoto’s “Punishment” in fact becomes more vivid over time. The fact that the punishment begins at the sound of a plate smashing in a sense signifies that at that moment bread stops being a foodstuff. The bread, which with the breaking of the plate loses its original role and ceases to be a foodstuff, goes back in time and reveals itself to be the body of Christ, which in contrast was destined to be subjected to violence. It stubbornly clings to the bodies of those about to die and becomes the very foreign object that sends them into the chasm of death. As if seeking to pull away from this fate, the people being executed make strenuous efforts to shake off the bread that has turned into flesh to guide them to their deaths. But they do not know if they have been successful in shaking it off. Because even after they die they remain blindfolded. Or perhaps among the people being executed there are real Christians (the performers are volunteers of high school age or older). For them, the bread, far from representing the spell of a painful death, is a trial for a blessing they must willingly receive in order to become martyrs. What all the performances have in common is that the people being punished wreck their own bodies, which have been reduced to the status of symbols in being referred to by their “(national identification?) numbers,” exhibiting different reactions of the kind only those facing the completely unsymbolic fate of death could display. Which probably explains why the deaths of the 26 people holding bread are so diverse. Despite the fact that it is not a play that is directed and rehearsed in advance, or rather because of this, no two of the 26 deaths were the same. 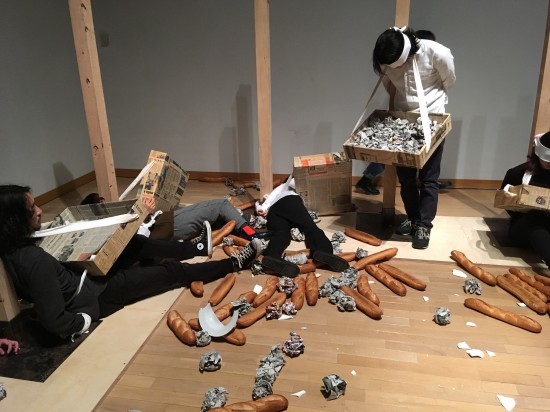 When all the executions were completed, each of the people of different ages and genders lay dead in their own way among the pieces of bread that had been shaken loose from their boxes and lay scattered on the floor. In terms of the present international situation, for some people this may call to mind the public executions of “infidels” by IS. But by no means is this a theatrical recreation of such executions. It is the very arrival, or advent, of the only scene devoted to a “rebirth” that bore the individuality of someone seeking to regain their own body through death for the purposes of escaping the violence of symbolization.