A Restatement: The Art of ‘Ground Zero’ (Part 17)
Kota Takeuchi and Fukushima II: The Correlation/Reciprocation between Paintings and Twitter 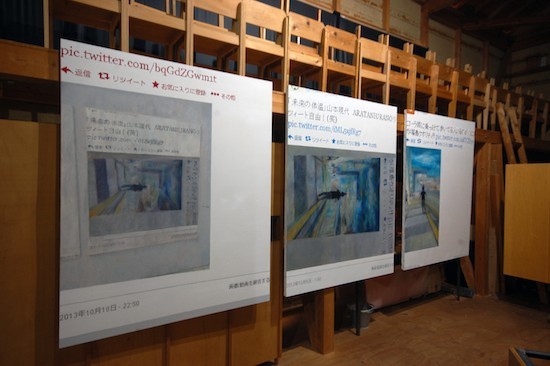 Despite the fact that we live in a world in which social networking services (SNS) have permeated society as an everyday tool, the relationship between art and the Internet is far from “refined.” Against this backdrop, I detected in the responses to the series of paintings produced by Kota Takeuchi using Twitter and their proliferation the emergence of a new approach to the use of SNS in art. Following on from the first part of this story, which appeared two columns ago, in this second part I will again be touching on Kota Takeuchi’s exhibition “Light Consuming Shadow” held at the Mori Art Museum in Iwaki, Fukushima. As mentioned in that earlier column, it is an “open secret” that Takeuchi is the person who caused such a stir on the Internet by pointing at a live-streaming camera at the Fukushima Daichi Nuclear Power Plant, where he had taken on a job as a recovery worker in the wake of the Tohoku earthquake and tsunami. And while he has again caused a stir, the situation this time is completely different in that nothing has “gone up in flames,” so to speak.

Because Takeuchi is known for his performance as the aforementioned “finger-pointing worker,” many people might imagine he is principally an activist, but the interesting thing is that this work is an extension of his painting practice.

Under normal circumstances, it would be difficult to imagine a more unlikely combination than “oil painting and Twitter.” One the one hand, oil painting involves applying oil paint to the surface of a canvas and rendering it permanent as physical matter by reducing as much as possible any deterioration due to aging. On the other, Twitter is even more ephemeral and short-lived than the most immediate forms of print media, such as weekly magazines and sports newspapers. In fact, it is probably both the appeal and menace of Twitter that precisely because it is so short-lived, people tweet whatever they like, producing unexpected results, albeit results that occasionally “go up in flames.”

Despite this, Takeuchi is pursuing with an earnestness approaching foolhardiness a method whereby he renders permanent as oil paintings the ephemeral information transmission and transitory qualities peculiar to Twitter. With his tenacity of purpose, he is the complete opposite of the trolls who take delight in lighting fires on the Internet. As to the details of what he actually does, these are outlined below. It is quite complicated, so allow me to take you through the process as I try to explain the logic behind it.

First, Takeuchi performs in Fukushima prefecture the kind of act likely to be uploaded by an unspecified “small number” of “curiosity seekers.” At this point, you could probably describe it as a continuation of the luring actions of the aforementioned “finger-pointing worker.” But why Fukushima prefecture? Well, the aim is to give exposure to the manner in which, since the Fukushima nuclear disaster, the “prejudice” directed at “Fukushima” from around the country has resulted in acts that would have been regarded as trivial before the disaster being interpreted as “Fukushima quality.”

To be specific, Takeuchi carried out a performance that involved walking around Iwaki Station on the Joban line in the rain with a cola bottle balanced on his head. There is no message contained in the act itself. He simply imagined a performance that would appear strange to onlookers in Fukushima prefecture (Hamadori) in the wake of the disaster – though not to the extent of posing a threat (it would not be unusual if such a person were to appear after the disaster) – and executed it. This performance becomes the subject of the spread of information technology that has seen every conceivable place able to be embraced by the Internet, and through calculating the kinds of “Fukushima”-esque acts that are likely to be tweeted, Takeuchi is able to step into this space where information is unevenly distributed and where citizens themselves provide it of their own accord.

Of course, there is no guarantee whatsoever as to how these performances will actually be tweeted in electronic space. Whether the actions he undertakes thinking they are likely to be tweeted actually enter “real virtual space” depends entirely on the actions of others, and this alone is something he has no knowledge of whatsoever until he investigates it later on.

Accordingly, the only option available to Takeuchi is to find out himself using a search engine whether or not the traces of his actions are being disseminated over the Internet by “someone.” If he does find something it means the performance was valid, and if he doesn’t it means it was ineffective. And if he does find something he produces an oil painting using the Twitter screenshot itself as the motif, reproducing it faithfully by making as few modifications as possible. 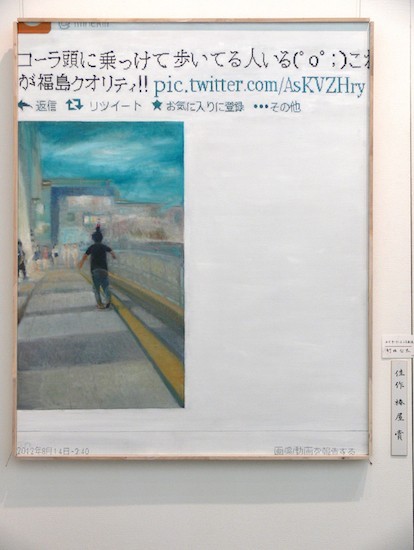 In other words, here Takeuchi is performing an about-face, moving agilely from his role as an activist who makes free use of the media to that of a painter who depicts the traces of his own actions that have been found later on the Internet as if they were “still lifes” or “nudes.” And the more clumsy the work the wider the gap between information space and painterly space. Moreover, he purposefully paints on canvas using not fast-drying acrylics but slow-drying oils, which require comparatively more time the more seamless the information space. Despite slipping past multiple layers of media in the course of their production, such oil paintings will never be recognized as products of technology by state-sanctioned media art. In addition, as if to highlight this camouflage even more thoroughly, Takeuchi goes to the trouble of sending these paintings to the “Iwaki Citizens’ Art Exhibition” in the guise of contributions from a member of the general public.

The multiple oil paintings Takeuchi exhibited at his solo show at the Mori Art Museum in Iwaki are actually an attempt to show all at once – as a record of the interrupted process whereby the first work was copied again and again as a continuous series – the way in which the first work born out of this project subsequently gave rise to one different form after another via the closed off space of the Internet. 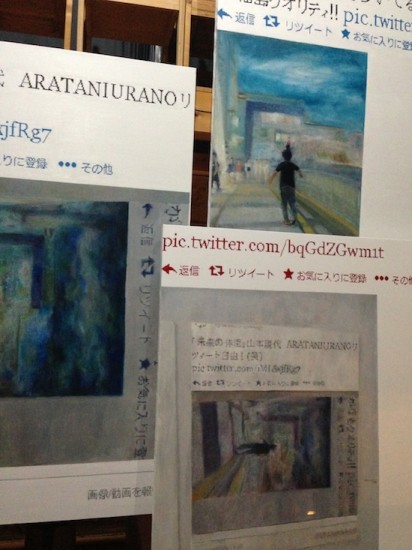 Incidentally, this first work caught the attention of Hiroshi Minamishima, the art critic who served as the judge on this occasion due to his connections with Iwaki, and ended up winning an award for excellence. It is unclear whether Minamishima simply thought an oil painting depicting a Twitter screenshot was unusual or whether he was genuinely impressed with how the painting alludes to the nested structure of information space. Not to mention whether he ever imagined the artist was the same individual as the “finger-pointing worker” at the Fukushima nuclear accident site. Be that as it may, what is certain is that this painting first saw the light of day not as a piece of “contemporary art” displayed in the central metropolis but as a work submitted to a local exhibition in an area badly affected by a severe nuclear accident.

The crucial thing, however, is what happens next. Takeuchi is planning to move the same image to a different location by re-exhibiting this painting, which has already won a prize, at a group show in Tokyo, this time as a piece of “contemporary art.” If he does, one cannot rule out the possibility that one of the very individuals who took to Twitter to judge Takeuchi’s original eccentric action “Fukushima quality” might by chance end up standing in front of it. Realizing that their own tweet on that particular day has turned into an oil painting without them knowing it may come as something of a shock. Perhaps their feelings will be really hurt when they learn that their tweet has been copied without permission and depicted as an oil painting. On the other hand, however, they will undoubtedly be rooted to the spot the moment they realize that without permission they ridiculed some unknown person’s actions as “Fukushima quality” and posted them on the Internet.

The series of oil paintings presented at Takeuchi’s solo show “Sight Consuming Shadow” is made up entirely of screenshots obtained as a result of this series of exchanges on the Internet being carried out spontaneously. As part of the process leading up to this, at “Art/Domestic: Temperature of the Future after Takashi Azumaya” (an exhibition curated by me and held at ArataniUrano and Yamamoto Gendai in 2013), which was Takeuchi’s second opportunity to show the same paintings in Tokyo, he allowed as a rule visitors to photograph the works and upload them onto the Internet, thereby permitting the paintings concerned to be sent into the unknown realm of information space again and again. Later, he used a search engine to track once again how these images drifted about in cyberspace, finding the images that until mere moments ago were oil paintings and painting them once again in oils. Among the results is a screenshot of a photo that photographer Takashi Honma happened to take while he was at the gallery and posted on Twitter. At this point, any distinction between photo and oil painting, oil painting and information, information and photo has lost all meaning. 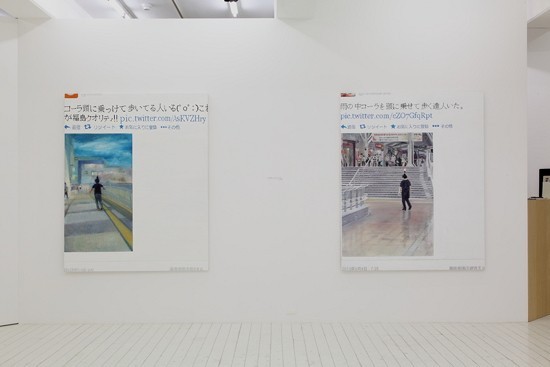 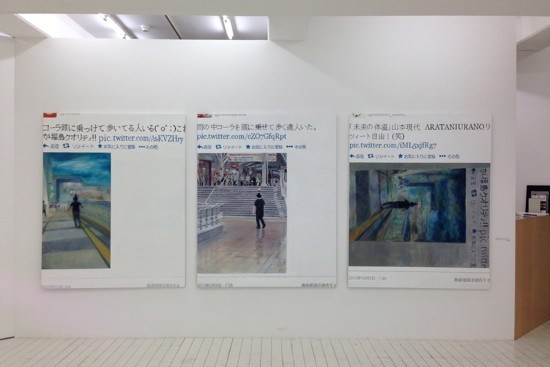 October 16, 2013
Far right: Ego Search 1-1 was added to the lineup. The painting was based on a tweet that photographer Takashi Homma posted via his info site “between the books,” although the artist says he was unaware of those facts when he selected this screenshot. 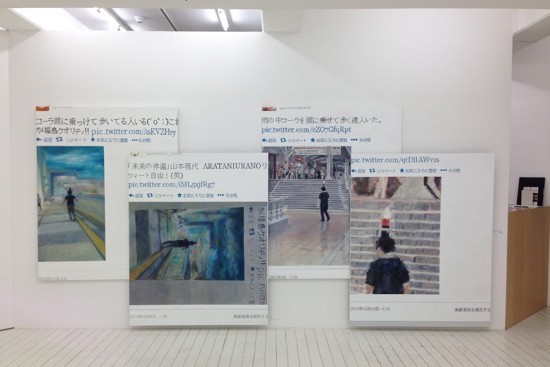 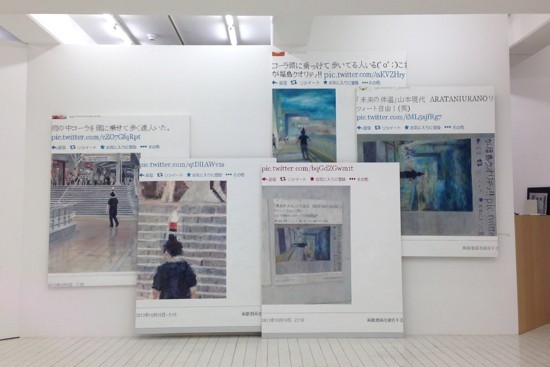 In this sense, the links stretching back-and-forth between the virtual incarnations of Takeuchi’s paintings and the physical paintings themselves are far more difficult to extinguish than Twitter eruptions, which die down with time. Perhaps the closest analogy is the scene of an oil fire that continues to burn unseen in a form that cannot be determined.