The ticking time bomb of okan-art

If outsider art inhabits one end of the spectrum away from mainstream fine art, there is another art form being lovingly nurtured at the opposite end: okan or “mom” art, as the name suggests, the kind of creative output generally associated with one’s mother. If, dear reader, you are wondering what on earth this could be, cast your mind back to the last time you visited your old family home and found rabbits made from cotton gloves breeding like…well, rabbits. Or while at a hostess bar, spied on the counter the cutest umbrella made from cigarette packets. With me now?

Found everywhere yet respected nowhere, not perceived as art even by those who make it, impossible to buy or sell but often given as a gift, and received more often than not with minimal enthusiasm: such are the quintessential features of “mom art.”

In recent years outsider art has begun to carve out a place for itself in the art world, in the process thus becoming an “insider” phenomenon. Few though would dispute that there is another alternative art form so ludicrously uncool as to attract the disdain even of outsider art insiders: art made by your mother. Or someone else’s.

Mom art is thought to have been first publicly outed – that is to say, begun to attract a certain following – with the launch in 2003 of a thread on the popular 2channel forum titled Datsuryoku no okan-art no sekai (literally, “The Ennui-inducing World of Mom Art”). It would appear the thread is not currently being updated, but its past log is easy accessible. Some of the efforts on here are true gems, making it well worth a look. 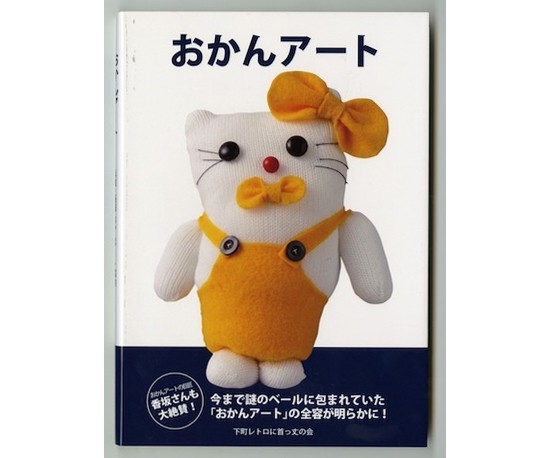 Inspired by Datsuryoku, during this period more and more people across Japan began to take an interest in mom art. One gathering of like-minded mom art-loving souls is the Kobe-based “Mad about Shitamachi Retro Group,” which is engaged in an ongoing quest for these marvels of maternal craftiness. Led by Yuki Ito and Kaori Yamashita, both born and bred in the port city, members diligently trawl the streets of its old working-class neighborhoods – that is, from Hyogo-ku to around Nagata-ku: what could be described as Kobe’s premium retro area, unchanged from the Showa era. Here they undertake dedicated fieldwork, as it were, to rediscover the old working-class neighborhood atmosphere disappearing in the shadow of the dramatic redevelopment occurring since the 1996 Hanshin earthquake.

According to “Team Leader” Yamashita, an architect whose credentials include official architectural qualifications from the French government, “We started by checking out the likes of old coffee shops and beauty salons, and over time noted the proliferation of ‘mom art’ on display in these places. Somehow we ended up being more interested in that.”

Collecting more mom art pieces with each of its projects, which include shitamachi excursions on the fourth Sunday of every month (of which over 40 have now been conducted) and the publication of a “Shitamachi Retro Map” (including an English version!), the group search out makers/artists and organize social gatherings and workshops, even exhibitions, culminating late last year (2010) in the release of the self-funded volume Okan-art, Japan’s first guide to this esoteric niche of the art world. 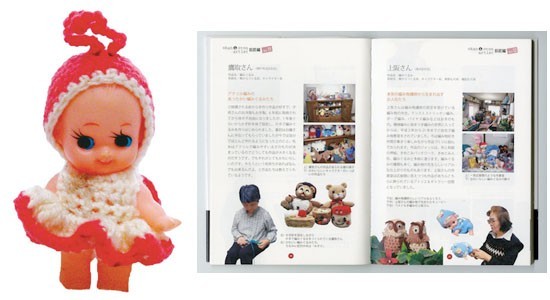 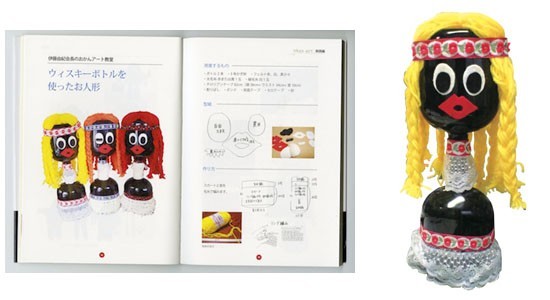 Top: The Okan-art guide to where to discover mom art (with maps). Center: Kewpie clad in knit and a spread from the guide introducing some of the genre’s most charismatic practitioners. Bottom: Okan artists share their secrets: here, how to make whisky-bottle dolls, step by step.

I’ll tell you later how to get your hands on this book not stocked by the usual outlets or offered on Amazon. It truly is a comprehensive guide to “mom art” starting with a definition, explaining how to classify different types of mom art, introducing some of the genre’s most charismatic practitioners, providing instructions for making one’s own mom art, places to discover it, and even a mom art map of Hyogo-ku and Nagata-ku. What a thrill it is to merely even contemplate strolling the old neighborhoods of Kobe, firmly clutching this invaluable tome.

According to Yamashita-san and her fellow fan(atic)s, mom art can be defined as follows:

1) Basically, while impossible to describe as very useful, there is something compelling about it.
2) It reuses things people no longer need (that is, rather than letting sleeping dogs lie, where they belong).
3) There’s never anywhere to put it. Frequently found displayed in the plastic bag it came in.
4) It infiltrates entire rooms. By stealth.
5) Its makers pay no heed to taste, imperfect gluing, etc.
6) Despite this, one thing it does have is heart – plenty of it.
7) People make too much of it, run out of places to put it, and start giving it away to others.
8) It has this incredible destructive power to render even the most stylish room tacky the instant it’s placed there.
9) That cute, cheeky face will either warm your heart, or irritate the hell out of you – reactions are very individual.
10) Beware of Hello Kittys and Doraemons made with feeling.

Depending on the reading, surely this definition is not that far removed from what contemporary art aims (or by rights should aim) to achieve. To wit, being of no practical use, confusing those who see it, wreaking havoc on hip, stylish spaces like a carelessly lobbed grenade, having only energy and passion in abundance.

Mom art has a peculiar destructive power of a sort absent from the work of professional artists, even from outsider art. My own research on the subject is only beginning, but the first time I consciously clocked a piece of mom art as mom art, the immediate association was with a Sonic Youth T-shirt. Yes, you read that correctly.

Formed over a quarter of a century ago, Sonic Youth have been the preeminent force in American alt-rock, but they’re also known for their graphics collaborations over many years with standout artists of the day such as Christian Marclay, Richard Prince, and Paul McCarthy.

Though a little unfair I suppose to mom art fans like the Kobe retro seekers, viewed in this way I believe that while at first glance the arid, violent, powerful suburban landscapes depicted by these artists in sound and graphics, and mom art with all its warm, fuzzy, motherly connotations, may appear to be polar opposites, they are in reality rather more closely related than we imagine. Come on, that CD jacket with the Mike Kelly photo: if that’s not mom art, what is?

A subtle shift in the way we look at a thing can turn it from something created with the best of intentions into a seething mass of cruel irony. Objects that by any reasonable definition should be hideously uncool, suddenly start to look cool. Depending on where a thing is placed, it can become an ornament desired by nobody, or a whizz-bang, sought-after work of contemporary art.

If the refusal to be tied to any single set of values is a characteristic of contemporary art, mom art may well be the most harmless-looking, but ultimately the most subversive of all sculptural forms. 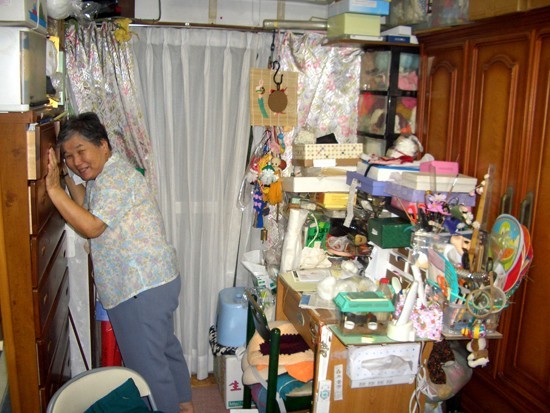 Kosaka-san, one of Kobe’s most prolific okan artists. 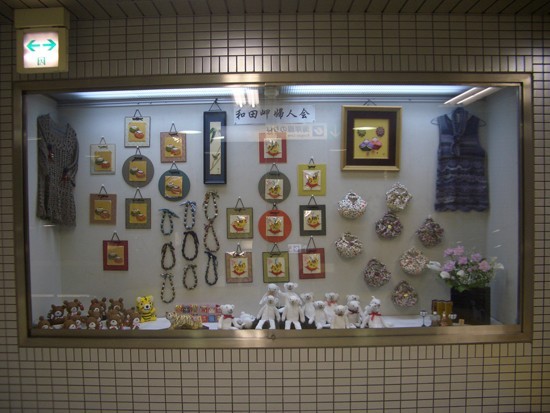 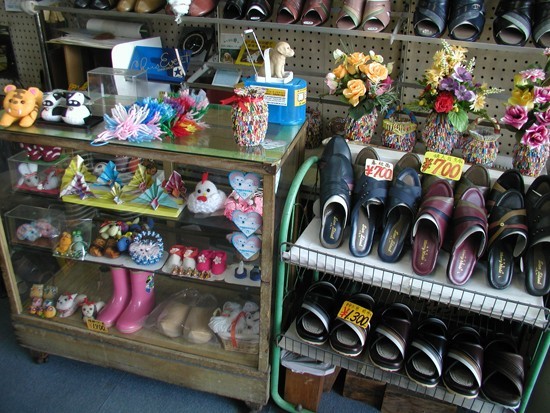 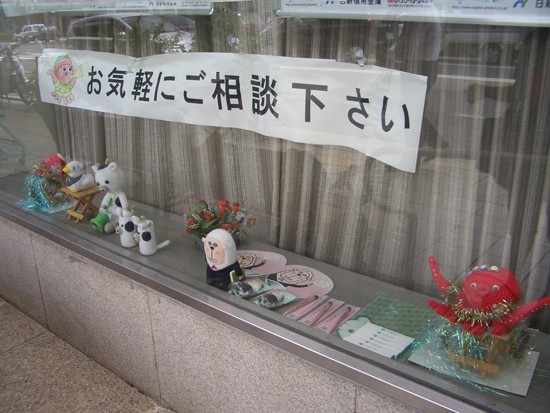