I once referred to the tendency among the generation of photographers from the likes of Takashi Yasumura (b. 1972) to the subject of my previous column, Yosuke Takeda (b. 1982), which was a kind of atavistic manifestation of the old Con-pora photography – photographs that are at once straight snapshots and photographs that reveal that they are photographs – as Neo-con-pora. One thing the Neo-con-pora have in common is that they hardly ever photograph people. Even among those who are not part of this tendency, there are few photographers in Japan today who deliberately shoot portraits. Or rather, such photographers exist, but their work follows a set formula from the start and is uninteresting, consisting solely of either commercial, calculated work (portraits of children that are both repellant and attractive, ie, the Yoshitomo Naras of photography! etc) or genre portraits (close friends, lovers, celebrities, the disabled, the homeless, etc). For many artists, portraits represent nothing more than the exposure of identity (cleverly capturing the essence of A), its discovery (revealing an unknown side of A), or the identification of humanity itself (learning about human dignity through A). This is what following a set formula means. The identity of the subject (their humanity/unexpected side/human dignity) is determined from the outset and the photograph merely identifies this, and ultimately the content of the photograph consists of nothing but technique in the form of the degree to which this identification is accomplished. It is no wonder such portraits are uninteresting when they are nothing but permutations and combinations of the same old hackneyed techniques anyway.

In contrast, the minority of eminent portrait photographers take photographs based not on identity but on sameness. If the “one and the same” in identity concerns the subject (“I” am “me,” not “you”!) then the “one and the same” in sameness concerns the object. When we’re naked we’re the “same,” when we’re sick we’re the “same,” when we die we’re the “same,” to the extent that you have desires, that you defecate, that you are male or female, and so on, you are the “same” as me. Sameness breaks down the outlines of individual identity and renders us continuous, and in this sense it is violent, boundary-crossing and scandalous.

Identity photographs (ID photos) establish, respect, and inform us about individual identity. They are photographs of friendship and honesty, photographs that preserve outlines, ie, overall pictures. Sameness photographs view others as one’s equal by showing with no consideration for the identity of the other that predicates and verbs are “the same.” These are photographs of love and humor, photographs that respond to surface details. Of course, for people who are slaves to identity, such photographs can be uncomfortable (don’t lump me together with them!) or taboo-breaking (daughters viewed as grown women, the Emperor viewed as human), but the very appeal of “portraits” lies here. By this I am referring to the act of presenting a random other perceived with love and humor as a different other.

It was with the above in mind that for a photography exhibition I curated in June, I chose the three photographers Ryuichi Ishikawa, Shinichiro Uchikura and Yosuke Harada, and have arranged for them to present their work in accordance with the theme “Japanese portraits.”

Ryuichi Ishikawa (b. 1984) was awarded an Honorable Mention at the Canon New Cosmos of Photography competition in 2012 (selecting judge: Minoru Shimizu). He attracted attention with the series “Okinawan Portraits,” which looks head-on at the people who live in Okinawa, a place burdened by so many layers of history as umi-no-kuni (Land of the Sea). Violence, grotesqueness, poverty, foolishness, self-indulgence, over-seriousness, despair, optimism… These and other contradictory characteristics collide within each portrait. Both the composition and subjects are carefully selected, and in the peculiar light and atmosphere of Okinawa, each and every individual is sexy, brimming with absurdity and sparkling like a jewel. 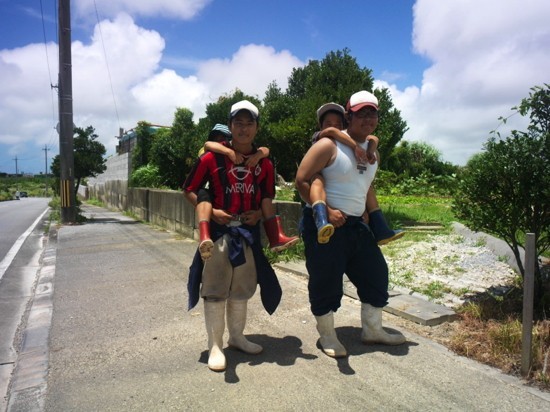 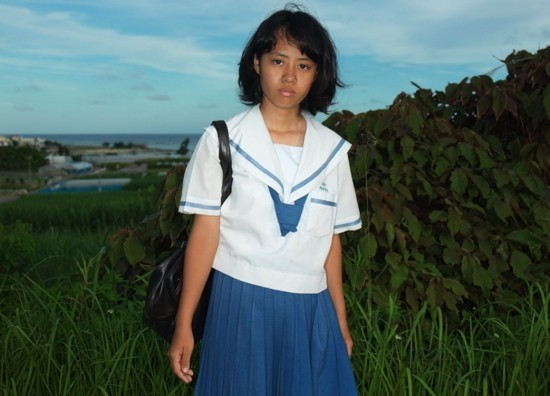 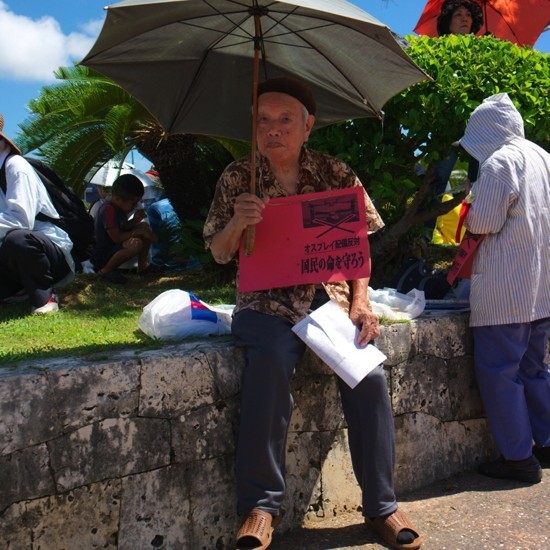 Shinichiro Uchikura (b. 1981) was awarded an Honorable Mention at the Canon New Cosmos of Photography competition in 2010 (selecting judge: Minoru Shimizu), 2011 (selecting judge: Katsumi Omori) and 2013 (selecting judge: Noi Sawaragi). His large-sized, staged portrait photographs – in which he thoroughly imposes his own aesthetic (or perhaps “wild fancies” would be a more accurate description) over the top of the carefully chosen subjects – are paradoxically outrageous yet straight. Completely staged, these photographs manufacture somehow b-grade, slightly yakuza-like archetypes (the leader of the Uchikura crime syndicate’s henchmen, his daughter dressed up for a birthday party, the head of the syndicate, a salesman for Uchikura Finance, the daughter’s enrolment ceremony; a high school art teacher who used to be a member of an extremist group, a nouveau riche Chinese child, an enka singer, a salaryman character from a famous TV commercial, a young boy forced my mama to dress up like a girl, etc.). With the toxin of archetypes that are both sexy and ridiculous, he suppresses the toxin of identity. One toxin counteracts the other, and paradoxically ordinary people remain. The kinds of others one might encounter anywhere manifest themselves in their naked sameness, their identities carefully removed. 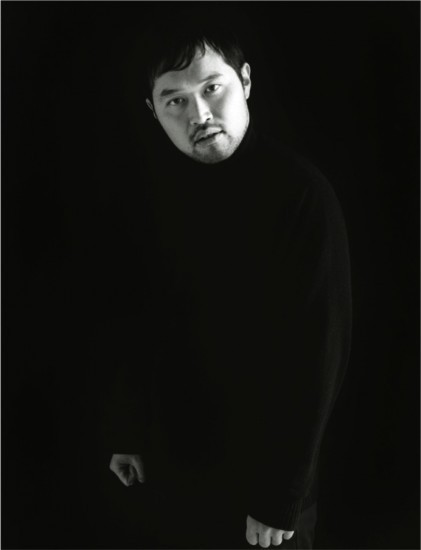 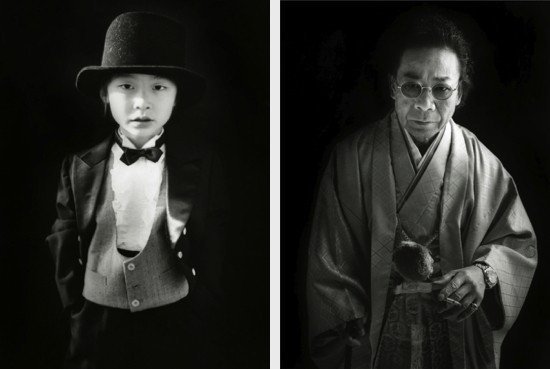 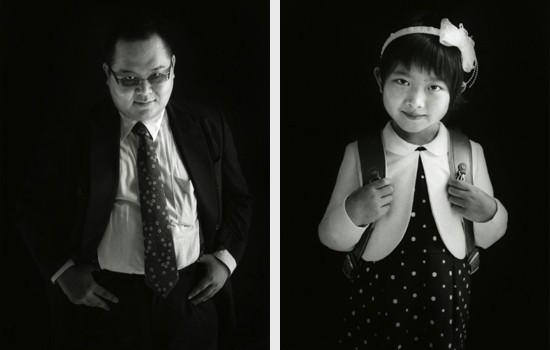 Yosuke Harada (b. 1982) was awarded the Grand Prize at the Canon New Cosmos of Photography competition in 2012. Although stylistically he is linked to the Neo-con-pora, he is an exception in that he continually produces outstanding portraits. These portraits look dispassionately at people Harada encounters in the context of ordinary everyday life, and lack both the layers of history of Ishikawa’s Okinawan portraits and the severe staging of Uchikura’s portrait series. They focus with a peculiar distance and space, almost but not quite touching on the consistency of presence that has no sense of presence of others who are neither particularly familiar nor strangers, but rather the kind of people whose presence is recognized only when they are gone (through death, illness, relocation, separation, etc). 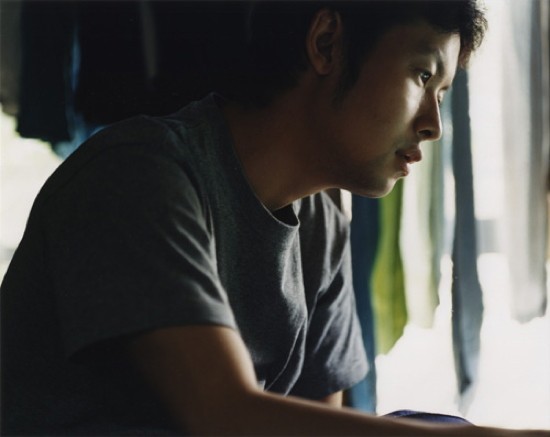 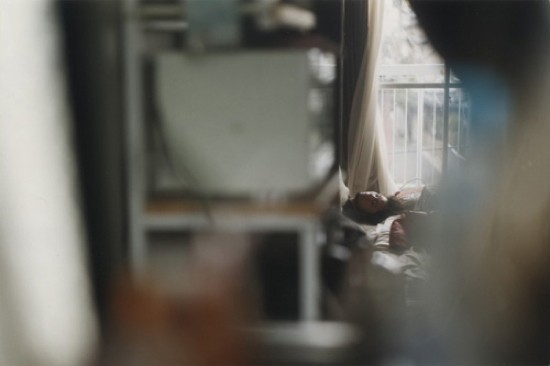 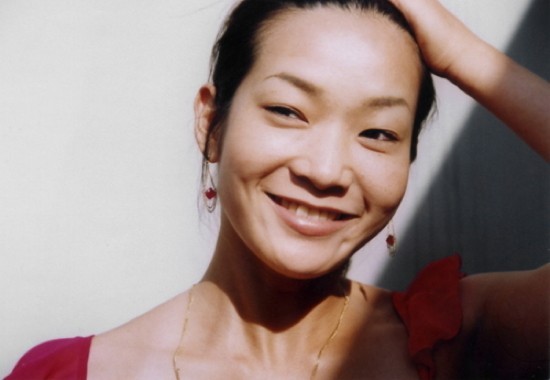 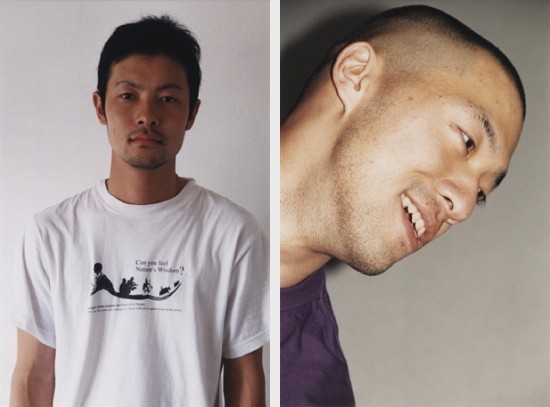 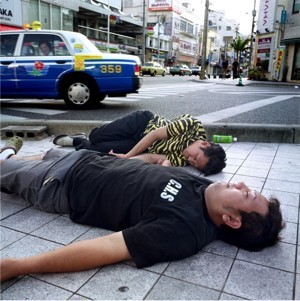