On “reproduction” – The tea bowls of Kohei Nakamura (Part 1) 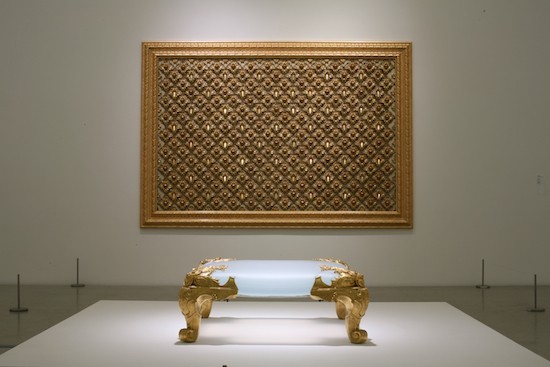 Kohei Nakamura – Wall: Rules of Form (2012). Foreground:Throne of Idea (2004). Installation view at “Art Crafting Towards the Future (2012) at the 21st Century Museum of Contemporary Art, Kanazawa.

Kohei Nakamura (1948-) is an artist best known for his contemporary art objects made using ceramic techniques, but in recent years he has extended his repertoire to include tea bowls, or to be precise, Raku and Koraimono tea bowls. The tea bowls Nakamura has exhibited to date range in style from Juko celadon to Kohiki, Ido, Katade, Hakeme, Mishima, Irabo, Chojiro and Koetsu, and all are so expertly crafted down to the irregular distortions, muddy colors, and austere kannyu and kase glaze effects, that one might almost mistake them for antiques handed down from generation to generation. In the world of ceramics, this kind of work is known as utsushi, or “reproduction.” In other words, over the last few years, Kohei Nakamura has been engaged in the creation of extremely clever “reproductions” of a range of tea bowls that more or less defined the aesthetic of “tea bowls” in the second half of the 16th century. 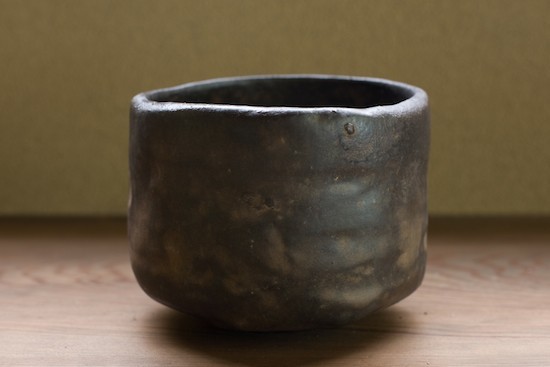 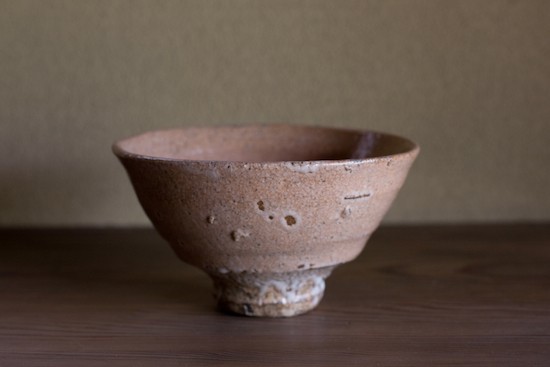 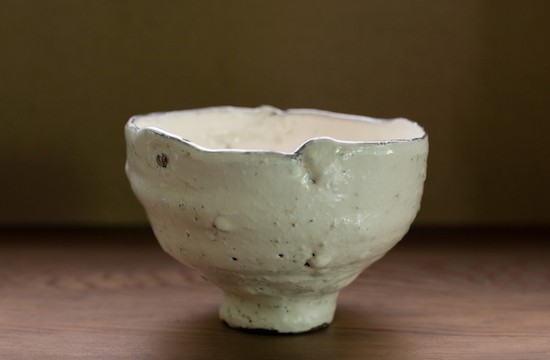 There are three problems with this. The first is probably the uncertainty many contemporary ceramics insiders feel when confronted with Nakamura’s clever “reproductions,” which sell in large volumes on the art market. In the end, isn’t an artist known for his conceptual art objects turning his hand to tea bowls simply a case of conservative reaction under the pretext of learning from the past? Then again, even that standard-bearer of avant-garde ceramics and pioneer of “objet-yaki,” or ceramic sculpture, Kazuo Yagi, made tea bowls. As Yagi once famously said, “Tea bowls are objects too.” So, what is Nakamura’s position on Yagi, or in other words on the relationship between tea bowls and art objects? 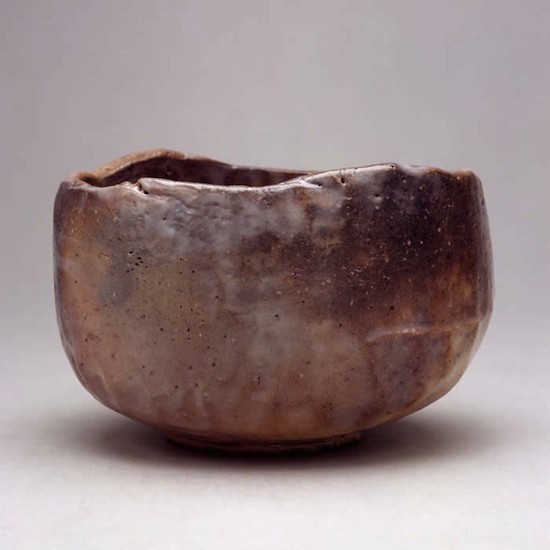 Secondly, why Raku and Koraimono tea bowls? This is because the concern of the artist is with the “eye” of the tea ceremony masters of the Wabi-cha style that established the aesthetics of the “tea bowl.” The second half of the 16th century, and in particular the Tensho era, was a period of transition for the Japanese tea ceremony during which there was a shift in the aesthetic sense of tea ceremony masters away from Karamono (wares of Chinese origin) to Koraimono (wares imported from Korea). This was nothing short of an aesthetic revolution in the form of the discovery of “beauty” in things that were imperfect, in things that were irregular, distorted, or lacking in some way, and things that had been cracked and repaired – in opposition to the aesthetic whose ideal was Chinese porcelain produced with perfect technique – and in the “application” of this aesthetic to tea bowls. In fact, Koraimono tea bowls were not originally tea bowls. They were “tea bowls” that were picked out by tea ceremony masters from among piles of white porcelain bowls, bowls on which the glaze had not completely melted due to insufficient firing (kairagi, or sharkskin patterned bowls), and biwa-iro, or loquat color, bowls on which the white color had failed to appear, or in other words the kinds of flawed everyday or ceremonial bowls that ended up being cast aside at kilns in the Korean Dynasties period, bowls that were by no means perfect compared to Chinese porcelain. Koraimono tea bowls were not tea bowls that were produced in their existing form intentionally but tea bowls that “happened” that way unintentionally, and it was their beauty that arose as a one-time-only phenomenon that the tea ceremony masters discerned and loved. These are not tea bowls that are made, but tea bowls that happen, or “tea bowls that are not made.” Tea bowls are things that are discovered or brought into existence by the critical eye of a tea ceremony master. Accordingly, one could say that making tea bowls is an extremely conceptual, critical activity. And in this sense, the Raku tea bowl tradition established by Sen Rikyu and Chojiro was a perversion in that it involved the “making” of such “tea bowls that are not made.”

The radical “eye” of the Momoyama period tea ceremony masters was among other things a product of the violent Sengoku period, and as such was something that could no longer be acquired by tea ceremony masters in the peaceful Edo period. Which is why in an effort to replicate the “eye” of their predecessors, it was all they could do to educe from the tea bowls that survived a number of prescribed “forms.” Koraimono tea bowls were classified in detail (Ido tea bowls alone were divided into the four categories Oido, Aoido, Koido and Kokannyu as well as the related category Idowaki) and their characteristics (finger marks, kannyu glaze, sharkskin pattern, loquat color, takenofushi or bamboo-node foot, tokin or helmet foot, and so on) itemized. Those “reproducing” Koraimono tea bowls must ensure their work conforms to these subdivided forms. The essence of Kohei Nakamura’s tea bowls lies not only in the “critical eye” and “perversion” that are intrinsic to the original tea bowls, but also in the prescribed “forms” that were an essential part of such perverted tea bowl-making and the exact opposite of the creativity of the early tea ceremony masters.

The third problem is that of where in “reproduction” the meaning lies. The “reproduction” of ceramics is a peculiar concept. It is not “counterfeiting” because it doesn’t involve copying a specific authentic work, and it is not “appropriation” because there is no intention of expressing as irony or parody the impossibility or antiquation of the reproduced item in a contemporary context. Neither is the aim the “recreation” of a particular technique or glaze color (the sky blue of Chinese Ru ware, or the Yohen Tenmoku glaze, for example).

The essence of “reproduction” can be traced to the fact that it is a performative interpretation. In Glenn Gould’s performance of Bach’s Goldberg Variations, for example, Gould’s own original interpretation of Bach manifests itself. In this instance, Gould has “reproduced” the music while conforming to the “form” of the score. As was the case with Gould’s performances, interpretations that are too innovative are open to criticism as “not Bach.” But if this is true, then where is the authentic Bach? The score shows only the notes, and gives no indication of the speed or loudness or what instrument should be used or how it should be tuned. Bach’s music is none other than that which is created on the occasion of a performance by a musician, ie, a reproduction. Or to put it another way, it exists only as such “reproductions,” which exist in as many numbers as there are musicians who perform it. The finest “reproductions” are probably those that continue to update Bach by undermining the inflexible notion of authenticity and giving rise to the realization that “Bach had these essential qualities as well,” or that “Bach could also have been like this.”

Such are the problems that arise when an artist known for his art objects makes tea bowls. How, then, do the tea bowls of Kohei Nakamura overcome these problems? (To be continued) 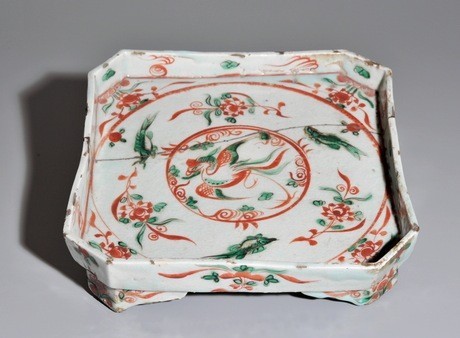