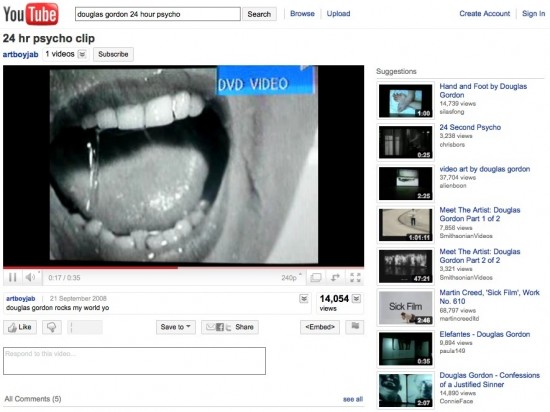 Seemingly, one has always spoken of the end of cinema. Even one of the main inventors of the apparatus, Louis Lumière, saw that it was “without a future,” and with the advent of television, and later VCRs and computers, the end of cinema has increasingly become a common notion. The “death of cinema” was never as imminent as with the breakthrough of the “multimedia” PC in the mid-1990s. Nor is it a coincidence that this was also the time of the proliferation of moving-image installations in galleries and art museums.

Yet cinema, irrespective of how we define it, persists. The number of theaters projecting 35mm film has risen considerably since the low mark of the mid-1990s. Cinema attendance is rising in most countries, and the film festival boom, which has provided a new circuit of exhibition for productions outside wide-scale theatrical distribution, is still gaining momentum. In art exhibitions, parallel to the “come-and-go-as-you-please” mode of multi-channel moving-image installations, there has been a widespread return of projections in a cinematic dispositif.

Held in 2007, Documenta 12 was a clear indication of this return. The exhibition’s film curation was assigned to a film archivist, Alexander Horwath of the Vienna Film Museum, who scheduled a film program in a Kassel cinema for every day of the 100-day event. The number of film installations in the exhibition venues, on the other hand, was relatively sparse. Another example of a similar strategy was provided by the 2009 Istanbul Biennial, where the Israeli filmmaker Avi Moghrabi’s feature-length Z32 (2008) was shown in a classroom in one of the biennial venues, with fixed screening times and a closed door to the rest of the art space. A third example, which nonetheless is hard to define as a cinematic dispositif as it consists of only of a succession of intertitles and the flash of an image, is Alfredo Jaar’s captivating The Sound of Silence (2006), which was recently presented in the International Festival for Arts and Media Yokohama 2009. Each screening of the installation concludes with a red light turning to green, after which new spectators are allowed to enter. This format secures the linear progression of the installation from beginning to end.

It seems possible to conclude that the “return” of the cinema-like dispositif in art exhibitions is a consequence of the resistance of the moving image to individual navigation and interaction.

The reception of moving images in art exhibitions has over the last 15 years often been informed by concepts of viewer participation and interactivity. These discourses have in part migrated from the computer to the art field. Just as computer navigation is at the hand of the user, the gallery spectator is often portrayed as being engaged in the navigation between screens and installations, experimenting with positions and movements through space as well as with the duration of the visit to each single installation. Some art critics have talked about the “spectator’s cut” in the gallery, in contrast to the “director’s cut” of cinema, to describe the extent to which these choices in reception are subject to the individual visitor. If computer discourses tend to disregard the fact that navigation follows a programmed pathway, art criticism in its turn often forgets that the gallery is deeply embedded in power structures that program the behavior of the visitors. The spaces of art institutions are strictly regulated – mastered by some and not by others.

The freedom of the spectator, and his or her active role in relation to the artwork, has always been at the core of traditional art discourses. Yet, when coming to terms with the experience of the moving-image installation, this emphasis on the free participation, interaction and co-production of the visitors becomes problematic. The idea of the active “visitor” is often contrasted with the passive viewer of classical cinema. One can find this rhetorical figure also in film theory at the end of World War II, when the French film critic André Bazin criticized “the cinema of montage” for leading and directing spectators, instead of setting them free in front of the open and ambiguous image. This phenomenological notion is based in an image that deploys depth-of-field and long takes, which would allow the spectator’s eyes to roam freely around the composition of the image. The image was for this reason prescribed to be modelled on the ambiguity of reality, where the viewer’s free choices and individual navigation in space were identified with a higher artistic quality.

The “new spectator” who moves around in the exhibition space to discover and explore the image is for this reason not at all new, but part of a traditional dichotomy between what is high art and what is not. In spite of the pressing need for an indexing of the forms of presentation of the moving image within the exhibition, any systematic circumscription of this heterotopical practice seems difficult. The problems with defining the role of the visitor become evident from the recurrent problems with agreeing upon a name for this position. This is why there is no consensus on the “right” term for the gallery visitor, spectator, user, receiver, experiencer or flâneur.

The resistance of cinema in the gallery

As argued by the curator Mark Nash in a text for the catalogue of 2002’s Documenta 11, the proliferation of time-based media in art institutions in recent years embodies a powerful structural change in art reception. The gallery is anything but a blank space for an unconditional encounter between the moving image and the visitor; it is a space that has been radically transformed by time-based media. The not uncommon aversions, especially among experts and connaisseurs of art, towards the linear mode of the moving image in art installations may be seen as a defense of the established order of the gallery. This is because the foundation of the values behind fine arts – the individual contemplation that occurs and the associations that arise before the work – is often negated in time-based installation art. Whether presented in a cinematic mode or as a spatial arrangement of multiple screens, moving-image installations in the gallery often provoke some degree of discontent among spectators, because the hundreds of hours of video at a major event like Documenta negate the viewer’s mastery of the exhibition. It is no coincidence that Douglas Gordon’s 24 Hour Psycho, which in its temporal duration remains partly inaccessible to the visitor, long has remained what is perhaps the most emblematic work of moving-image installation practice, since it highlights exactly this “unattainable” dimension of the time-based image in the gallery installation.

This is because the moving image structures the gallery space in time. Just as Walter Benjamin described the negation of individual contemplation in cinema as the decisive factor that transformed the concept of art, there is a resistance in the moving image towards being integrated in the logic of reception of the gallery arts. The moving image has an internal resistance to its being subject to individual navigation and subjective associations. It negates the stable and fixed, pre-existing subject of the traditional understanding of the arts in a Western context. Instead, the moving image makes the spectator subject to its own temporality, and produces subjectivity as a process in the installation.

Cinematic time is not phenomenological time. The filmmaker and theorist Jean Epstein wrote on cinema in the 1920s, ’30s and ’40s as a time and space alterior to that governing our everyday senses. The elasticity of time and space in cinema confronts viewers with a mode of perception that is incommensurable with the navigation in time and space on which we depend in our everyday lives. For this reason, the linearity of the moving image is the condition for producing a non-anthropological mode of perception.

These properties of cinema as a space and time different from that of our everyday optics constitute the resistance of the moving image to the “spectator’s cut.” They are also what makes cinema impossible to quote outside its own medium. The “un-attainability” of cinema for quotation lies in its resistance to immobilization. In Raymond Bellour’s “Le texte introuvable,” written in 1975 as a short comment on Christian Metz’s work on film and language, the film image remains un-quotable because its movement is inaccessible for text and illustrations. Motion is always lost in description, in frame enlargements and in graphic patterns of movement. With analog and digital video, if we understand these media as different from cinema, a quotation of movement becomes possible. This is why Bellour today identifies a new “un-attainability” in the installation mode. The interplay between screens, sounds and gallery spaces produces new forms of montage of a complexity beyond description.

The temporality of cinema and film installations still eludes quotation, and the very same dimension of the moving image is what makes it resist the discourses of subjective contemplation and free associations of ideas in art institutions. The pathways of the spectator, the movements and time spent in various places in the museum space, have always defied quotation in all arts and media. The individual reader’s pauses, re-readings, skipped passages and so on in literature have never been quotable. Or should it rather be claimed that these subjective aspects to the moving-image installation today are to a certain degree attainable? The many small films documenting art installations on YouTube illustrate a personal experience of a visit rather than a work. Aren’t the visit, the excerpt and the personal association exactly the mode of the online video servers?

The position of cinema within the mass culture of capitalism has spurred many acts of resistance to its dominant modes of production, economy and ideology throughout film history. But as many filmmakers have addressed, the issue of resistance in and through cinema cannot be isolated from the resistance of cinema. The linear mode of the moving image makes the audience confront a time and space beyond phenomenological perception. This temporality is also what makes cinema elude quotation. Cinema resists an easy assimilation to digital ubiquity, but also the temporality of the gallery associated with the figure of the visitor, the flâneur or the user: It resists the subjective authority that informs the concept of the “spectator’s cut.”

Trond Lundemo is Associate Professor at the Department of Cinema Studies at Stockholm University, and in 2002, 2004, 2007 and 2009 was a Visiting Professor and Scholar at the Seijo University of Tokyo. He is the editor of two volumes on the relations between film and the other arts, Film/Konst; Kairos 9.1 and Kairos 9.2 (Stockholm: Raster 2004).