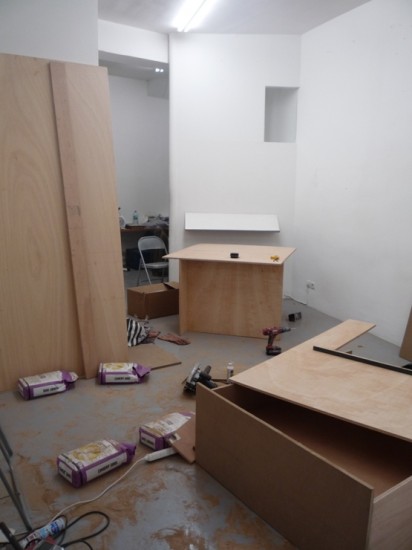 Our apartment building caught fire this summer. The kid below us had a fight with his dad, a fireman, so he set his bed on fire and went to school. We came home to a hallway littered with broken glass, charred clothes, a sack of rotting food hanging on a tree branch. His ceiling – our floor – is a black mess, carbonized joists with a flakey crust of sheetrock; we had to move. Don’t feel sorry for me. My wife grew up in Paris, and our three-bedroom apartment was furnished with a commode haute, an oak breakfront chest, a cheval mirroire, a chiffonier. The mirror is cracked, but the rest is okay, more or less, water-stained but intact. We’re moving into one bedroom, smaller than any of the three we had, and we’re four: my wife and I, two girls. I don’t know where the furniture came from – family heirlooms I guess – but they won’t fit in the new place so I’m cutting them up. If we had a fireplace we could burn them but we don’t, so we’ll live in them.

The rule of thumb when rebuilding anything is to take the cost of building it new and double that, at least. The first thing you’ll need for this kind of work is a healthy sense of humor and a heavy duty rip hammer with the waffle face buffed off. I started with the commode: tipped it down to look at the crown pediment, sat on it, spit on it, squinted at it. You’ll be hard pressed to destroy a good mortise and tenon joint in white oak, but it can be done, and it’s fun. The joinery is done in the old style, hand-cut tenons dry-fit long and set with hide glue and a blind pin, brittle and strong. Tap in a chisel and spread the joint till you spot the spline, keep tapping till you blow out the pin, then lean on it. Now it doesn’t matter, put your back into it, snap it. I just sit on it, ease a bit of weight on the seam till it splits, back off of it and wrack it. Now it isn’t a piece of furniture anymore, it’s just two sides with a split crown; a vertical divider with eight dadoes and hand-chiseled demi-lune drawer slides, steel post pins with hook hangers; 16 oak-front curve-cut dowel joined shelves; 18 bull-nose case-framed drop doors with domed brass pulls; and a faux base shoe foot, bleached along the skirt, chipped and blown out around the mitered mortise. That was some asshole’s idea of a good week of work, a shop boss’ display frame, someone’s painstaking demonstration of le gout de detail, gleaming and oiled, polished, wet looking. It’s just a stack of old checked wood now. Leave it there.

There’s something wrong with my finger, like to the left of the tip it’s numb or tingly. It’s fine, but I’m sure that at some point I must have sliced it off at the nail – on the fly probably – framing up under a sink. It’s healed now, just some mild remedial nerve damage. I’m not sure why I’m even bringing it up. Why does a man have to do the best he can? I worked for an architect; then I worked for a contractor remodeling houses, threw out my back. I don’t know where the money went. I allow that the government got more than their share. Oh well, who cares. I ain’t asking nobody for nothing if I can’t get it on my own. Now I’ve got my own shop, I do custom work, exhibitions mostly. It pays better, and I set my own hours. What’s an exhibition space? Usually it’s a useless space, a waste of space, an unfurnished shed without much in the way of facilities. Maybe not a complete tear-down, but at the minimum it usually calls for a gut remodel, a bit of structural work on the floors maybe, a good hard look at the wiring. The first thing you have to ask yourself is: what are you willing to put up with?

I’m gluing that damn commode back together backwards, broke-back and inverted. I splayed it out flat, stacked the boards any which way, marked it, cut it, joined it, done it. I got in it, crawled in it, twisted and tried to stand up in it, flexed it till I bent it. I scribed and cut it, spun a wheel around it and ground down on it, got down on the ground on it, spun it around, rolled around on it. I got a point under a lifted edge, pried back and knifed it, pulled and peeled it, just wet it and peeled it till I spread it. My genitals are more or less part of my legs, they’re connected to the top of my legs with a piece of skin. I got down on my knees in front of it, leaned under it, into it, put a shoulder under it to hold it while I drilled it, dropped it back and filled it, bored it out with a spade and laid a blade in it, burned a cut through the wood, smoked it, stood and dropped it, came back on it, cracked and opened it.

I lost a bet on it. I got shit on it, I got cut and bled on it, I split my head on it trying to get ahead of it, I got head on it. I lost my head on it. I lost my head on it and I put my hand on it, punched my hand all the way through it, splintered it and put my fist through it, cracked a rib on it, lost it. Poked a finger in it, pinched a finger in it, broke a bone in it. I didn’t wait for it, I couldn’t wait for it, I made a slit in it, made a space in it, I lost some face on it. I oiled it, let the oil soak into it and took a coke, came back and wiped it off with a cloth, rubbed on it till it was wet, slid on it, actually slipped on it, drifted in and out of the cut, bore down till it broke. A man was in it, more like half in it, trying to open a door with a 10-pound sledge, trying to speak at it, trying to get a good look at it and speak to it. I fit myself under it, fit my body into it like if it was a bed, mirrored, cold and adult, a rigid plank, pearly and dank.