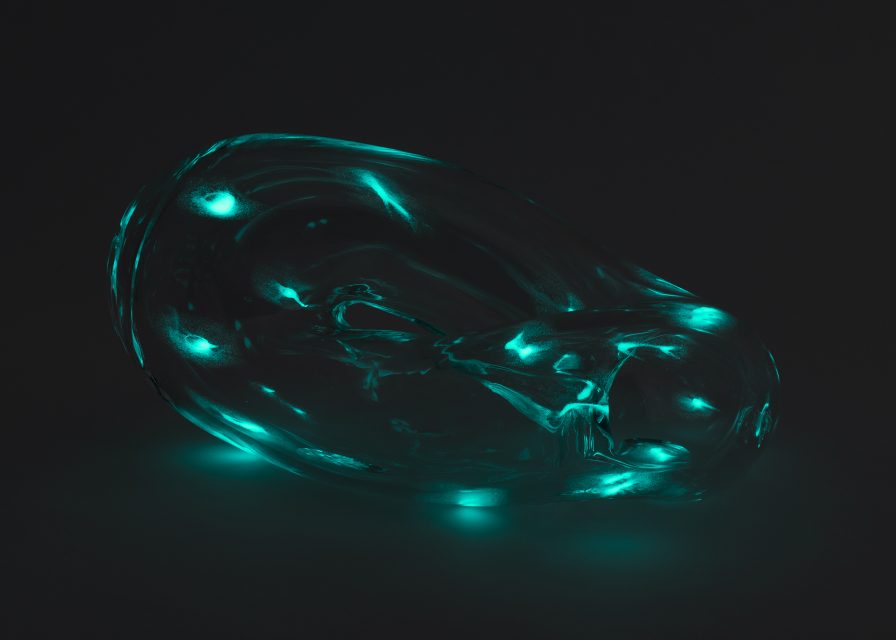 Mika Tajima’s exhibition titled Spectral features sculptures and paintings that visualize transitional, contingent states of being to evoke a world in which entities and organisms body forth into the realm of perception.

The exhibition engages philosopher Hannah Arendt’s apparitional politics in which the appearance and disappearance of living things constitute an ethical-sensorial experience of the shared world. Derived from the Latin spectrum, meaning an “image” or “specter” allowing itself to be seen, the word spectral carries the agency for self-display and concealment. Tajima extends these ideas to consider the appearance of the self in social space as a sensed aesthetic encounter of presence and absence. The exhibition presents different modes of visibilities through objects that are shifting, transforming, condensing, and disappearing under different conditions.

At the center of this exhibition is a sculpture titled “New Humans II”. Emergent gatherings of synthetic humans rise from the liquid surface of a black monolith. Appearing to morph like a supernatural life form, these dynamic clusters of magnetic ferrofluid liquid produced by machine learning processes are images of communities of synthesized people modeled from actual DNA, fitness, and dating profile data sets sourced from public and leaked caches. The algorithm identifies affinities amongst these new human profiles and visualizes contingent communities forming and dissolving without convergence.

In the “Art d’Ameublement” series, airborne paint particles condense on the inner surface of transparent acrylic shells to reveal the shape and volume of the otherwise sheer object. In one of the paintings, phosphorescent pigment is applied as an underlayer which absorbs and stores light energy. In dark conditions, the charged painting will emit light from its interior to make it visible and appear in a different mode as a glowing object. The title Spectral also refers to a “forbidden transition” in phosphorescent spectroscopy where the absorption of energy undergo a molecular transition that is not allowed or is asymmetric causing a slow emission of light instead.

The “Pranayama” body-object sculptures are porous containers for air, outlining the invisible matter that is exchanged between internal and external spaces. Transparent blown glass Anima vessels appear as emergent bio forms punctured with machinic hardware to create ventilated openings, indicating the release of breath that formed or ‘animated’ the objects and exposes the interior to the outside.

“Negative Entropy” is a series of abstract Jacquard woven portraits depicting image information derived from field recordings taken at various industrial and energy production sites. The works are transmediations of field recordings made in specific locations – they are material visualizations of sound waves produced by action. The title of the series, “Negative Entropy”, is taken from a term used in quantum physics that describes the reversal of entropy, i.e. negating the amount of disorder in a system, or, in other words, preserving order in a system.